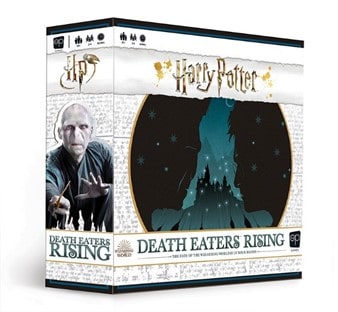 Board games are always fun for the holidays! Want to learn some brad new games for this holiday season? Then come to Friday Night Board Games every Friday at Gnome Games Green Bay West There will be a friendly Gnome always on hand to teach you the game of the night and sometimes we even have some special promo items to give away. Stop in and play a new game every Friday!

Harry Potter: Death Eaters Rising captures the difficulties and terrors Harry Potter, Ron Weasley and Hermione Granger face during their fifth year at Hogwarts as they scramble to persuade the wizarding world of Voldemort’s return.

In Harry Potter: Death Eaters Rising, each player must assemble teams of witches and wizards from the Order of the Phoenix, Dumbledore’s Army, and Hogwarts to fight against the growing threat of the Dark Lord. Starting with either Harry Potter or Hermione Granger representing Dumbledore’s Army, Minerva McGonagall or Albus Dumbledore from Hogwarts, or Nymphadora Tonks or Sirius Black from the Order of the Phoenix, players will be able to rally a variety of year-5 characters to their cause, such as Ginny Weasley, Luna Lovegood, Alastor Moody, Mrs. Norris, Severus Snape, and Rubeus Hagrid. The collective armies and players must then work together to stop the spread of dark influence throughout the wizarding world.

Players have to battle Dark Wizards Peter Pettigrew, Bellatrix Lestrange, Lucius Malfoy, and others who bear the dark mark for control of key wizarding world locations, including the Ministry of Magic, Diagon Alley, and Hogsmeade Village. To be successful, players must vanquish Voldemort’s Death Eaters and eventually defeat You-Know-Who before they corrupt and take control the wizarding world.

When Lana and her father return to their seaside hometown to help clear the debris of a big storm, Lana remembers how much she’s missed the ocean — and the strong, reassuring presence of her aunt. As Lana explores the familiar beach, she discovers something incredible: a colony of aquicorns, small magical seahorse-like creatures that live in the coral reef. Lana rescues an injured aquicorn and cares for it with the help of her aunt, who may know more about these strange creatures than she’s willing to admit. But when a second storm threatens to reach the town, choices made many years ago about how to co-exist with the sea start to rise to the surface. Lana realizes she will need to find the strength to stand on her own, even when it means standing up to the people who she has always relied on to protect her.

In the co-operative game The Aquicorn Cove Board Game, 2-4 players take on the roles of members of a small fishing village struggling to survive while maintaining a balance with the natural world. To win, the villagers must feed and grow their village, while helping to restore the health of the reef and aquatic ecosystem. The villagers are fortunate, though, and the waters of their cove are home to the beautiful and benevolent aquicorns, as well as the wondrous reef guardian Aure, who can help them both to understand the impact humans are having on the environment and to save the village.

ClipCut Parks is a first of its kind, innovating roll-and-write gameplay as the first roll-and-cut game!

The city needs your help! The mayor has called on you to create a set of gorgeous parks with greenery to beautify the urban landscape. With a pair of scissors and a plan, use your snipping talents to clip a park full of dazzling multi-colored features. The first player to complete five park cards wins!

You open your eyes to discover the most horrible truth of a lifetime… It has just come to an end and you are a ghost, floating in the air! Terrified, you look at your own body. A group of strange individuals have gathered around your mortal remains, watching it closely with sparks of fascination in their eyes. They want to communicate with you to discover how your life ended. You need to talk to them and reveal the truth so the culprit can be judged!

Paranormal Detectives is a deduction party game. One player takes the role of a Ghost. All other players work as Paranormal Detectives and need to discover how the victim died. Using paranormal abilities they will communicate with the Ghost, asking open questions about the details of the crime. The Ghost answers in a variety of ghostly ways – by arranging a hangman’s knot, playing chosen cards, creating a word puzzle on a board, drawing by holding the hand of a detective and many more!

At the beginning of the game, the Ghost player receives a story card with a full description of the murder. Each card depicts all the details of the case. Each Detective receives asymmetrical, pre-constructed set of interaction cards, player investigation sheet, and a player screen.

Detectives may try, twice during the game, to guess what has actually happened to the victim stating who was the killer, where did it happen, what was the motive, how was it done and what was the murder weapon. Then the Ghost writes down secretly on this Detective’s investigation sheet how many of their answers are correct.

The game can end in two ways: