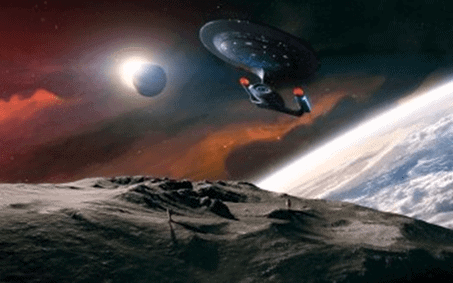 Explore the Galaxy at Gnome Games!

Captain’s Log. Stardate 72178.6 – With the arrival of fall on Earth, Starfleet has ordered your ship to investigate unusual readings in the sector! Set course for exploration, and boldly go where few have gone before!

Each Thursday during October, Gnome Games Green Bay East will be hosting missions for the Star Trek Adventures Living Campaign! The decisions you and your crew make will shape the missions and the course of Starfleet. For your mission briefings and assignments, look below!

Extended stellar and planetary survey missions to a remote part of the Shackleton Expanse near Sigma Librae and the Romulan Star Empire find an interesting planetary system that contains two Class-M planets that orbit each other, and show signs of a sublight spacefaring civilization that has recently destroyed itself.

A month ago, Starfleet picked up an

unusual alien signal emanating from the Seku system, deep inside the Carina Nebula. The runabout Susquehanna was initially dispatched to investigate, but the crew failed to report and is presumed lost. Starfleet must investigate the source of the signal and locate the missing runabout.

October 18th – We Are the Stars

Following the discoveries on Seku VI during the episode Signals, Starfleet has ordered all starships assigned to Narendra Station to the region around the Alpha Toryui star system. They are to assist in the recovery of a civilian archaeological team and in assisting a Starfleet Corps of Engineers Geospatial survey platoon from Alpha Toryui II after long range sensors detected that the primary star of the system was days from gravitational collapse and becoming a supernova.

A scientific and strategic meeting aboard Narendra Station leads the crew on an investigation for lost Federation probes, to a planet teeming with ancient power.

With the Star Trek Adventures Living Campaign your crew can shape the fate of Starfleet and the galaxy! Will you accept your assignment and boldly go where no one has gone before!