October Friday Night Board Games at GBW – SPECIAL EVENT: Play with the Creator of Vampire Hunter the Card Game! 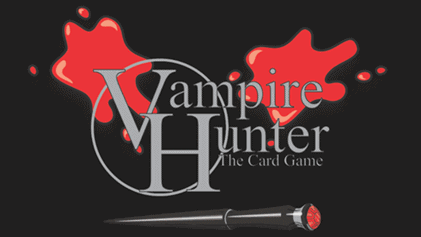 SPECIAL HALLOWEEN EVENT – PLAY WITH THE CREATOR OF VAMPIRE HUNTER THE CARD GAME!

Come meet Ryan Krippendorf, the creator of Vampire Hunter the Card Game and learn to play his brand new game! Become a member of the Knights of Saint Benedict, collect items and weapons from the city and fight vampires that look to harm the innocent. Win the game by being the first to collect fifteen fangs—or the last player left with blood in your veins.

There’ll be Halloween treats and costumes are welcome!

Friday Night Board Games are free and we play every Friday from 6 – 9 at Gnome Games Green Bay West. They’re always be a Gnome to help you learn the game of the week.


Patchwork Doodle is a roll-and-write version of Patchwork, with each player having their own 9×9 grid to fill in over the course of the game. Each round a number of cards are played and a roll of the dice tells you which one to use. Once a certain number of cards have been played, the round ends, players score points, then you lay out more cards for the next round. At the end of the game you lose a point for each space that you don’t cover, so try to pack everything in as tightly as possible!

In Deadly Doodles, 1-4 players simultaneously draw paths through a dangerous dungeon. Draw cards, draw a path through your dungeon, and rack up points! Collect loot and fight monsters…or run away screaming! Can you defeat the dragon for the big score?

October 11 – Vampire Hunter the Card Game PLAY WITH THE CREATOR!!!

Vampire Hunter is a single deck card game where players try to become the best Vampire Hunter by killing undead blood suckers and collecting their fangs.

As a player, you’ll take on the role of one of the Knights of Saint Benedict, collect items and weapons from the city and fight vampires that look to harm the innocent. Win the game by being the first to collect fifteen fangs—or the last player left with blood in your veins.

Come learn to play this game with Ryan Krippendorf, the creator and have some spooky Halloween game fun!


The most eminent architects came here to erect a magnificent city with the best theaters, greenhouses, and taverns. Each architect wants to make the most significant contribution to the city construction, but their ambitions will inevitably lead to a challenging competition.

In Architectura, your table turns into a grid of city streets and blocks. Each building you construct affects the value of the adjacent buildings, or even destroys them! Let’s say you’ve just built a magnificent temple. A vulgar market around the corner doesn’t belong there anymore and has to be shut down right away — but a park near the temple’s entrance will definitely be a good match and will even profit from the divine proximity.

Rotate the cards to change their values, resolve their special effects, and do your best to carefully manage your options to become the best architect of the city!

PARKS is a celebration of our National Parks featuring illustrious art from Fifty-Nine Parks.

In PARKS, players will take on the role of two hikers as they trek through different trails across four seasons of the year. While on the trail, these hikers will take actions and collect memories of the places your hikers visit. These memories are represented by various resource tokens like mountains and forests. Collecting these memories in sets will allow players to trade them in to visit a National Park at the end of each hike.

Each trail represents one season of the year, and each season, the trails will change and grow steadily longer. The trails, represented by tiles, get shuffled in between each season and laid out anew for the next round. Resources can be tough to come by especially when someone is at the place you’re trying to reach! Campfires allow you to share a space and time with other hikers. Canteens and Gear can also be used to improve your access to resources through the game. It’ll be tough to manage building up your engine versus spending resources on parks, but we bet you’re up to the challenge. Welcome to PARKS!