Friday Night Board Games for November – Help us pick the Stocking Stuffer of the Year! 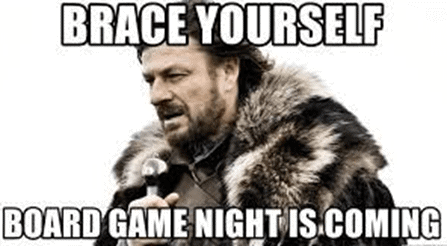 Board Game Friday Nights this November at Gnome Games Green Bay West is all about the new and upcoming! Help us pick the Stocking Stuffer of the Year, play some brand new games, and even one that isn’t released yet! There will be a friendly Gnome always on hand to teach you the game of the night and sometimes we even have some special promo items to give away. Stop in and play a new game every Friday!

November 1 – Help Us Pick the Stocking Stuffer of the Year

Every year Gnome Games picks a Stocking Stuffer Game of the Year. There are a few criteria: it must be easy to teach and quick to play, it can be played by a wide range of people, it’s $20 or under, and it fits in a stocking (we’ve been flexible on that last one, we’ve seen stockings that will fit an entire Gnome Games staff in). We’re going to put out all the nominees we have so far and ask your help to pick a favorite, or nominate one we may have missed. Your votes will be combined with the staff votes and the winner will be announced during Thanksgaming on November 16th!

From the award-winning designer Bruno Cathala, Ishtar is a game in which you play the role of a gardener aiming to transform the dry desert into the Lost Hanging Gardens of Babylon. To accomplish your mission, you will have to plant flowers, which, if you place them well, can help you gather precious gems and activate actions. Whether to buy Trees (which will block the link between two Flower spots, as well as earning you points) or to purchase upgrades (such as getting two more points per Tree card at the end of the game), collecting gems will be a crucial part of the game. Get them before your opponents, recruit apprentices, send them to earn points in the copses of flowers you have created, block others and think carefully of the upgrades to purchase if you want to become the best gardener at the end of the game!

From the frozen lands of the Snark to the torrid intrigues of the Bannisters, there is one truth that echoes through the Umpteen Kingdoms: Gloom is coming…

Gloom of Thrones, a standalone card game, spreads the misery and suffering of Gloom to the ill-fated land of dead monarchs, dead knights, dead brothers, dead sisters, dead heirs, dead grandmothers, dead chambermaids, and almost-dead bastards. Wrest control of a noble family, guide them through lives of satirically-riddled sadism, and deliver them to their ultimate fate. Which is, of course, more death.

Printed on transparent plastic cards, Gloom of Thrones allows multiple cards to be played on top of the same character, determining their ultimate fate while still allowing you to see straight through their machinations, just like Lil’ Finger, advisor to his seventeenth – whoops! eighteenth! – king and/or queen. As your characters seek a moment of respite on the Porcelain Throne, your goal is to plague them with horrible mishaps like being Seduced by a Sibling or Tumbled from a Tower, while filling the lives of the other noble families with happy events like w̶e̶d̶d̶i̶n̶g̶s̶ and family reunions that will raise their Self-Worth score. The player with the lowest-scoring, most tragedy-afflicted family wins!

When you aim for the Porcelain Throne, you’d best not miss…

Lander is a 2-4 player, space-themed strategy game that emphasises area control (resource collection), tableau building (crew development) and set collection (missions). You and your friends will assume the roles of corporations, competing to prepare Kaimas-2 (the first planet outside of our solar system capable of supporting human life) for a large-scale colonization effort. The corporation that contributes the most will become the market leader going forward!

This is an advance copy of the game. The Kickstarter for Lander won’t launch until March, but you get to try it here first!

Pack your lucky socks and get ready for an adventure exploring Dragonrealm! Sneak into the Witch’s Cabin, search the Ogres’ Treehouse, or storm the Dragon’s Lair. Add adventurers to different locations in the hopes of getting the most treasure. But watch out for goblins who might get there first and grab the treasure before you! In the end, the player with the most treasure wins.

Players will play card melds of straights and sets (color or number) to roll dice to attempt to place units on locations. Once a location is full, it is scored.

New locations are revealed to be captured. Players continue in this manner until a certain number of locations are captured. Each location is worth a value in points and additional points are awarded for other events.