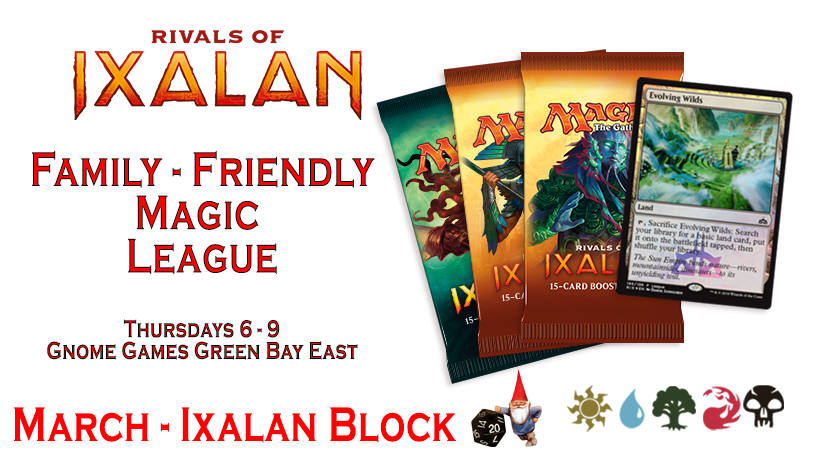 Gnome Games is already a fantastic place for families, but we are designating the Thursday evening Magic League as particularly family-friendly.  It’s a less intimidating option to learn how to play and have fun playing Magic the Gathering. The Family Friendly Magic League is perfect for new players, and the Gnome Games staff will be on hand to help you get started and is always accessible for questions.  Also, it’s meant to encourage new players to take the next step in playing Magic, but trying out new decks, cards. Of course, it’s a wonderful opportunity for families to play together as a group!

Magic Leagues run for a single month.  For the March Magic League, players start with the purchase of three boosters (two Rivals of Ixalan, and one of Ixalan), which they use to make a 30-card minimum deck, including 12-13 lands.  Weeks two through four, players have the option to purchase one additional booster each week to add to their deck. Also, if your deck isn’t doing so well and you have 3 or more losses, you may purchase an additional booster to help improve it. Magic League play features fast-paced games where you’re in control of how often you play and who you want to match up against. Finish ten games during in-store Magic League play and you’ll receive a premium foil promo card (while supplies last)!

We are kicking off the March Family-friendly Magic League March 1, so fight off the end-of-winter blahs and bring your family!

What is Magic the Gathering?

Magic the Gathering is a collectible card game weaving together interesting worlds with fascinating characters. Players use their own strategies to build new decks and test them against other players who are part of the massive Magic community.

Are you a new Magic player?

If you have any questions about the family-friendly Magic League at Gnome Games Green Bay East, please don’t hesitate to ask one of the Gnomes!
We look forward to seeing you on Thursday evenings at 6:00!