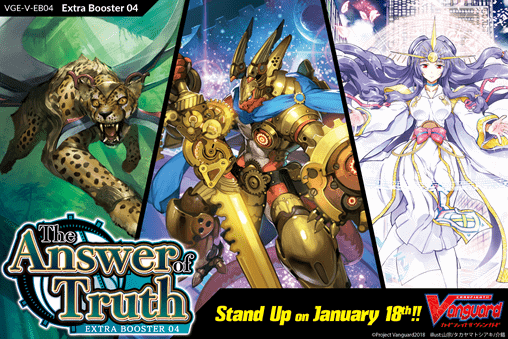 The Answer of Truth Sneak Preview events take place a week before the release of the new set and allow you to play with the cards before they can be purchased! Featuring the Clans: Genesis, Great Nature, and Gear Chronicle – with special new series abilities for Gear Chronicle players, this is a great set if you play these clans or want to start!

Every player will get 4 packs to build out of. Everyone will also get a special promo card! The winner of each Sneak Preview will take home an exclusive playmat, and additional playmats or boosters may go out randomly based on attendance.

After you get your fun new cards at the Sneak Preview you can try them out during Bushiroad League!

Bushiroad League is for Cardfight Vanguard and Weiss Schwarz. You can get one of this month’s promo cards every time you play and even earn more by coming every week! There are also random drawings each month too, so make sure you come in and play!

Come on in and make some new friends at Bushiroad League!

When can you play?

Each time you check into League you may pick one of this month’s promo cards. You’ll also be recorded so that at the end of the month you can pick a promo from the promo binder based on how many times you were at League. The more times you come, the more choices you have! (The Monday and Thursday Leagues at Gnome Games Green Bay East count as separate events and can not add attendance together.) If we have a special drawing that month you’ll get one entry for each time you attend too!

We’ll also give out a Lily of the Valley Musketeer, Kaivant randomly every league.

We’ll also give out a random Love Live Sunshine Deck Box each Weiss League or Tournament based on attendance.

Everyone gets a promo card for playing and the winner gets a special card. The last Sunday of the month we give away a random playmat too!

Every Sunday there is also a Weiss Schwarz tournament at Gnome Games Green Bay West.

Grab your cards and let’s play!