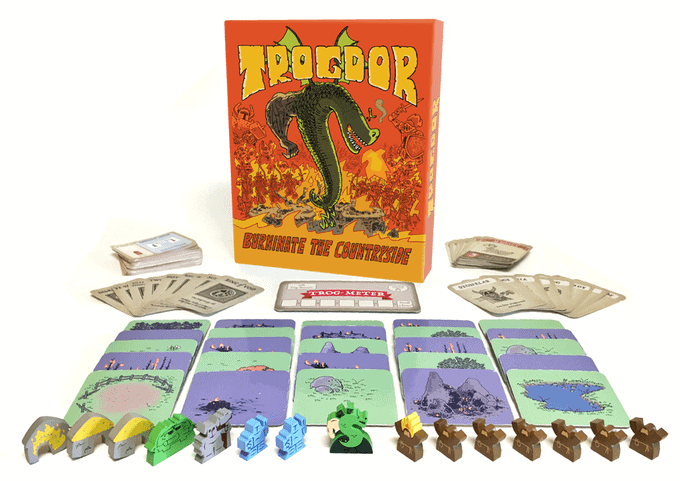 Trogdor the Burninator arrives at the Gnome In October – Preorder today!

Trogdor! The Board Game – A game of Cooperative Burnination and Majesty!

In the kingdom of Peasantry, the beefy-armed dragon Trogdor the Burninator has one goal: the total destruction of the countryside! Players take on the roles of the Keepers of Trogdor, mysterious acolytes of the Burninator who use their unique abilities and items to help Trogdor in his destructive quest. Burninate the countryside and its cottages by flipping them to their flaming side! Chomp peasants for health or fry them for fun! Do all this while avoiding knights and archers and majesty shall be yours! Er… shall be Trogdor’s… more accurately.

Homestar Runner will be sending Trogdor! The Board Game, a cooperative board game to Gnome Games in October!

This game is inspired by the Trogdor, the Burninator character from Homestar Runner’s Strong Bad web cartoon series.

Trogdor! The Board Game is a cooperative board game that takes place in the land of Peasantry where players become the Keepers of Trogdor. Their goal is to use various action and item cards to help Trogdor work his way around a 25-tile board, and turn each countryside tile to its “burninated” side. However, the peasants aren’t going to take Trogdor’s assault lying down. They fight back by sending knights and archers after Trogdor to impede his progress.

Players take their turns controlling Trogdor. On their turn, they can use action points to bestow action and item cards on Trogdor so he can more optimally burn obstacles, eat peasants, and flip tiles. The game continues until the players either win by flipping all of the countryside tiles to their ‘burninated’ side, or lose when Trogdor’s health runs out before the tiles are all flipped.

Preorder Trogdor! online today and the Gnomes will have it waiting for you at your favorite Gnome Games store!

Preorder Trogdor the Board Game Online before October 5th for just $54.99 and we’ll let you know when it’s in at your favorite Gnome Games store!